We lived in Lansing for about 4 years where Ryan learned to walk, run and ride a bike.  I remember when Ryan was about two – he fractured his collar tying to follow his big brother Mike by jumping from the couch to the chair - - - but did this slow Ryan down – NOOO   - with his arm in a sling we would take walks around the block with the red wagon - - but Ryan was not riding in the wagon – he was pulling his big brother Mike in the wagon.

Ryan was not quite three when Chelsey was born.  One day when Chelsey was just an infant, she was resting in her bouncer seat while Carla stepped away for a minute.  Chelsey started to fuss and Ryan picked her up from under her arms a carried her to Mom (remember – he was just a toddler himself).

Ryan started his business mind at a young age - - - the only way Carla could potty train him was to pay pennies for his good deeds on the potty chair (Pennies for Poo).

We moved to Delta Township and Ryan started Developmental Kindergarten at Wacousta Elementary school.   His teacher (Mrs. George) was so impressed by Ryan that she recommended he skip Kindergarten and advance right into First Grade (which he did).

Ryan’s youngest brother Jacob was born when Ryan was 10.  Ryan was determined that he was to be the first to see his baby brother – so much so that he, Mike and Chelsey stayed in the delivery room and witnessed the birth of their baby brother on father’s day.

Ryan often made time to spend it with Jake.  Jake loved to play Nintendo & Xbox games with Ryan and was always excited to see Ryan when he was home.  Two years ago Ryan was an assistant coach for Jacob’s flag football team.

Ryan Loved to play board games (Monopoly, Risk, etc. . . .) with his cousins - - and if I’m not mistaken Ryan probably won more times than not – but I’m not sure his cousins would admit to that.

Ryan was in Scouts and had great leaders such as, Dan Schooley, Kim Ramm  Allen Denning .  These people helped play a key role in the development of Ryan’s sense of commitment and integrity.

We had a number of activities with the scouts from Pinewood derby races, canoe trips down the AuSable River, Back Packing in the Porky Pine Mountains and White Water Rafting in Virginia.    Trips I will never forget.

Ryan played many sports and had a number of coaches from little league to Varsity sports whom also played key roles in his life.

Ryan’s favorite sport was football.  He started playing full contact ball in 4th grade.  He never missed a season and played all the way through his Senior Year of High School.    I loved watching Ryan on the football field - there’s no better feeling than watching your son make a touchdown catch!

Ryan was always an entrepreneur.   As soon as Ryan was old enough to push and lawn mower or pickup a shovel with heavy snow he was on his way to making BIG MONEY!   Ryan wasn’t afraid to knock on any door.  Everyone who hired Ryan were so impressed by his work that they always called him back.  At age 15, Ryan started a business with his Brother Mike and friend Sean called Two Men & A Tractor.   Those boys did every lawn they could within walking distance.

When Ryan received his driver’s license he bought a truck and expanded outside the neighborhood.  At this time he changed the name to Lawns Plus and traded in his brother for a new partner – his friend Josh Harkins.  Sorry Mike – I guess he wanted less singing and more work.

Ryan also performed many other services from painting fences to cleaning garages.  We often received calls at home asking if Ryan was available to help with something.  Many of these people are here today.

Ryan moved from Lawns Plus to working with Mike Franco at Pure Green.  Franco was so impressed by Ryan that he told Ryan he had a job any time he needed one.  After Ryan broke his back he went to work for Evolve Tele-Services, (a 24/7 phone bank for infomercials such as the Total Gym).  It wasn’t long before Ryan was consistently among the TOP in sales.

Ryan was awarded a scholarship and attended Lansing Community College for two years.   Ryan was enrolled to study business  at Western Michigan University this fall.

Ryan had so many friends and touched the lives of a great number of people in his short 20 years.  Anything Ryan set out to accomplish – he accomplished by putting an action plan into place and diligently perused whatever it took to succeed.

Ryan’s winning smile and fun personality made him instantly liked by all who met him.

RYAN, I AM SO VERY VERY  PROUD OF YOU FOR ALL YOU HAVE DONE AND  THE OUTSTANDING YOUNG MAN YOU HAVE BECOME.

SHINING YOUR WONDERFUL SMILE AMONG THE STARS !

TO ALL PARENTS HERE TODAY – GIVE YOUR CHILDREN A HUG, TELL THEM YOU LOVE THEM AND HOW VERY PROUD YOU ARE OF THEM. 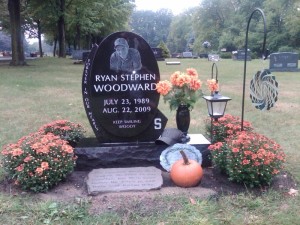 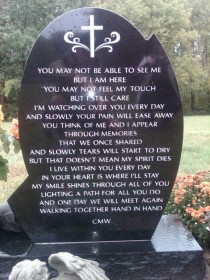 No Event(s) Scheduled at this time